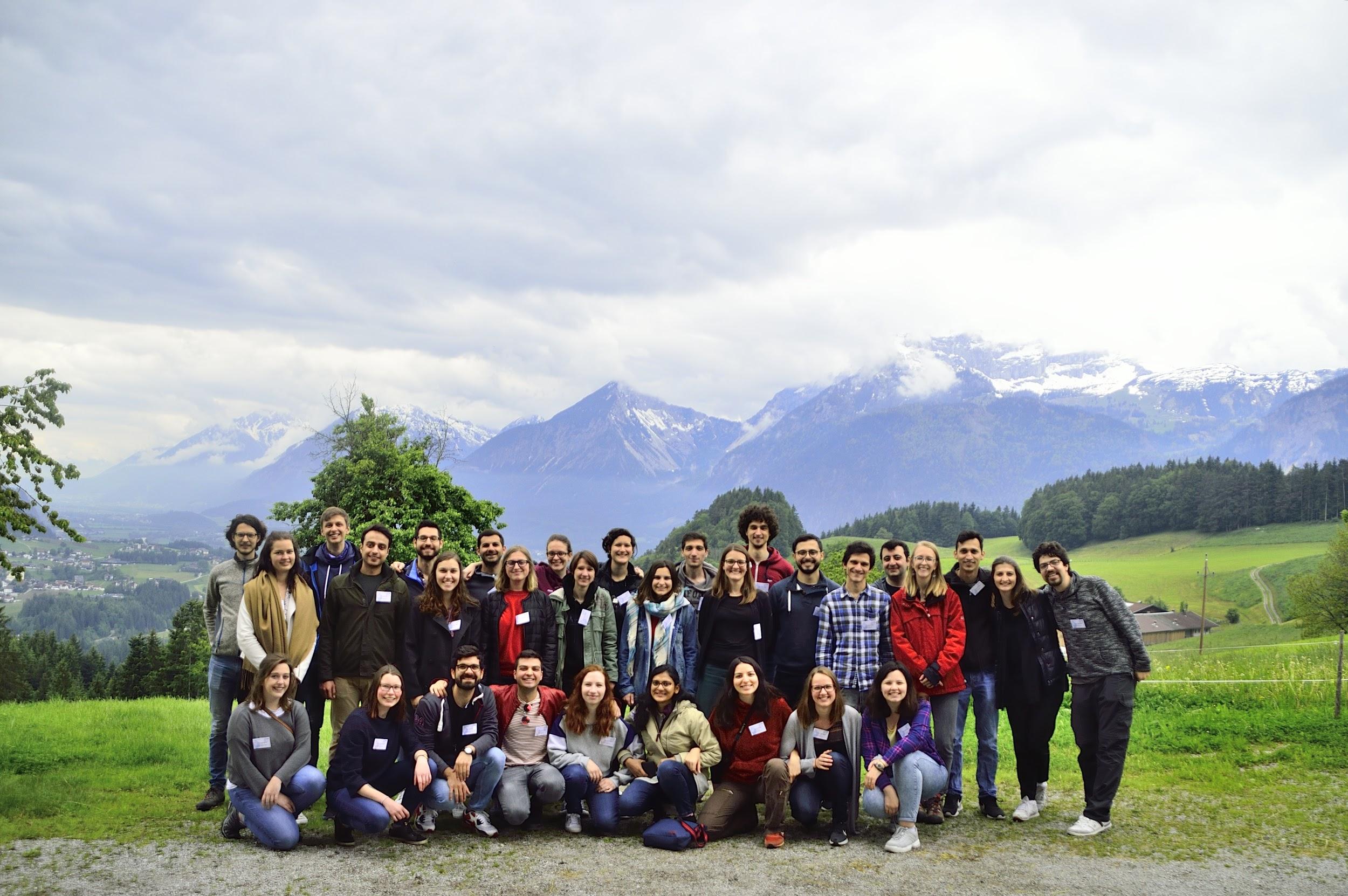 The third MSNE retreat started on 30th of May - in a very picturesque village called Brixlegg in Tyrol, Austria - and of course it couldn’t start without adventures from the beginning. We’ll try to share with you the amazing neuro-weekend we spent together.

First thing we remember is how Aleks, Nogay, Tanya and our awesome organizers (Mel, Fulvia and Adrià) were trying to take all the cookies and other less important things from Adrià’s place - and almost missed the bus since the driver was expecting to be leaving earlier. After half an hour of worries, phone calls and problem solving live-tutorials, we finally met everyone in the bus. There were a lot of new faces around because this year to facilitate networking it was decided to invite people from the other neuroscience-related programs.

Focused on meeting new people, we almost ignored the amazing views we could be seeing from the bus windows. However, we went back to reality when the road was so narrow we thought we couldn’t fit and our retreat would end very soon. However, thanks to our especially skilled bus driver, this wasn’t the case. 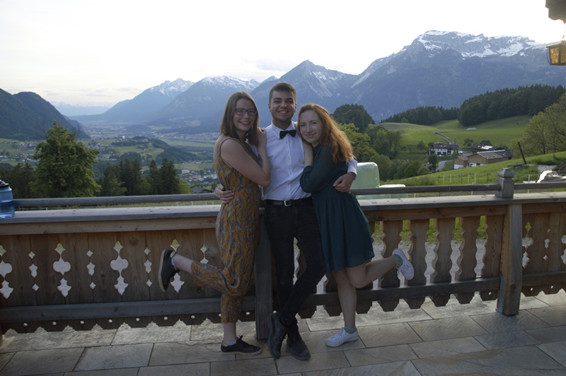 After everyone had found the best buddies to live with, all of us gathered in the main ‘seminar’ room to listen to the talk by Prof. Emily King from Bremen University on ‘Low complexity models in Data Analysis and Machine Learning’. This was extremely lively and interesting. We were talking about mathematical basis used in data compression, and Prof. King convinced us to never use .jpeg again.

After all the intense conversations we finally made it to the fresh air and had a small introduction round in a very fun form. Everyone was excited for the first conversations and we found a lot of common topics with the students from the other programs (from neuromorphic programming to Munich bars).

As the weather was getting worse, we decided to go back to the main room and start the discussion night organized by Christina and Jonas. The topic was “Women in Science”. We feel that it is an important question nowadays, as there are still lots of cases of inequality in general and in a scientific domain due to misogyny and sexism. We had an amazing discussion trying to find possible solutions to the existing issues. Everyone could participate and we had a lot of interesting talks on it till night. We were really happy to note that in our program and the retreat the number of male and female participants is balanced not only among students but also when it comes to professors.

After this long first day, some tireless people were still able to hang out with a few beers and continue discussing about equality, neuroscience and life. Others - intelligent ones - decided to go to bed after understanding that everything was just about to begin.

Having everyone surprisingly on time for breakfast, we started the second day with a talk given by Dr. Nora Heinzelmann on ‘Neurophilosophy of Aesthetics and Moral Decisions’. As many of us were not very familiar with the questions of philosophy we were happy to start with very basic concepts and approaches in the field which Dr. Heinzelmann has introduced to us in a very fascinating manner. We went very deep into discussions on philosophy of science in general and then went on to the questions of aesthetics and why do people tend to describe one thing as “beautiful” and the other as “ugly”. It was very impressive how such ambiguous terms can be distinguishable in MRI-studies. I guess most of us were really excited about it.

Lunch break with new topics to discuss, nice food and first student talks continued the day. To enjoy our free time, we decided to go on a hike together. It was supposed to be a low-level hike, but everyone knows how ‘low-level-german hikes’ are. All we can say is that the ice-cream reward when we got there was amazing. And the views were too, of course!

To make this day even more amazing (which was almost impossible), there was a barbecue night right after that. We should give our credits to the people responsible for the great dinner and also the after-dinner music improvised performance, everything was perfect.

If you thought the day was ending here, you’re absolutely wrong. The night had just started and we still had too many beers to drink. We guess everyone has their own opinion about what happened during the beer-time, but we can point out a lot of music, dancing, stories under the stars, games and many more. We even heard about a beer competition and bachata classes. As far as we remember, that was a great night.

Starting the third day energetically, we had a talk by Prof. Tobias Reichenbach from Imperial College London on ‘Auditory processing: Neuroengineering and diagnostics of cognition’. It was a super interesting talk about neuroprosthetics focused on cochlear implants and hearing. Dr. Reichenbach utilized many ideas from theoretical physics to find out how the auditory pathway actually works. This knowledge could be further expanded to the cochlear implants' development.

After this exciting talk we had lunch followed by an interactive presentation from Annika. She was at that moment working with mixed reality and she brought to us the glasses to try them on.

To enjoy the after-lunch free time, another hike was proposed. However, we can’t say much about it because we were afraid of another ‘low-level hike experience’ so we didn’t go. Those who went said that this time it was shorter but steeper - so we’re glad with our lazy decision. During this time, there were also yoga classes, volleyball and football and even sunbathing. Everyone had chosen her or his favourite activity to enjoy the free time.

After a bit of exercising, we had the second round of student talks. We really enjoyed the variety of topics and the enthusiasm all students showed when presenting their ideas. We would like to thank Mel, Elvin, Cristina, Anna, Isabelle and specially Ainhoa, one of our invited students from ‘Neuro-Cognitive Psychology’, for taking responsibility and having done such a great job.

It was about time to get ready for our fancy evening. Everyone was super pretty and waiting for the late ones hoping that the sun was still up by the time they finished. Against all the odds we managed to get a great MSNE-retreat group picture. The proof is right here. 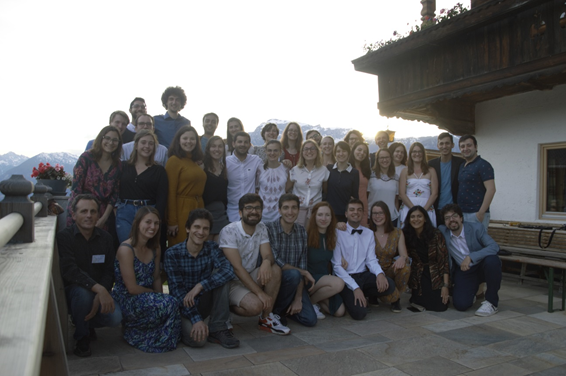 Last night was coming and so the ‘Neuro-quizz’ and last beer championship day. We were impressed by how little we know about neuroscience, and how many ways we have to show NMDA with our body. Some representations were outstanding.

It was sad to wake up and understand that it was the last day of seeing Nick and Aleks carrying beer, organizers running with chairs up and down, getting stressed with ‘everything has to be perfect’ and enjoying that incredible landscape at any moment.

That morning we heard a talk held by Prof. Albert Compte from IDIBAPS titled ‘Circuit Mechanisms of Working Memory’. He told us about the ring model he developed to explain working memory phenomena his lab is studying. The talk was inspiring, some of us even consider carrying out a research internship to learn more about it. 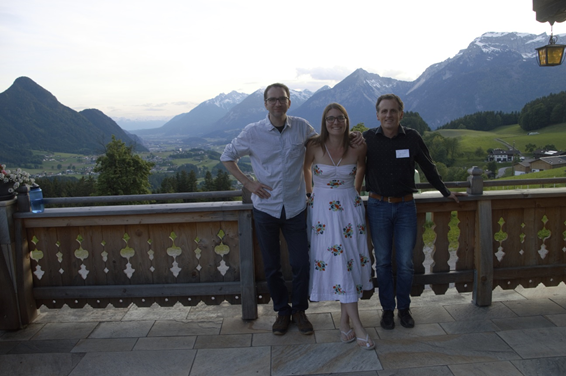 After that, time for our last lunch, last nice views and last cow photos. Although it is hard to sum up what we went through there during these four wonderful days, we have tried to do it. It was great to have such a variety of topics covered in the talks, to meet all the people from inside and outside of our program and to spend time getting to know one another.

We would really want to thank everyone who took part in the retreat so that it became an incredible experience. Especially, we want to thank our amazing organizers that made this real and ENB for funding this kind of events, that are hugely valuable. We hope to see everyone (and many others!) for the next retreat and enjoy as much as we did last time. New organizers … try to beat this!